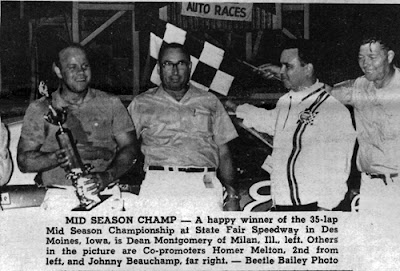 Des Moines, Iowa (July 27, 1968) – Dean Montgomery of Milan, Ill., who hasn’t had too much glory at the Iowa State Fairgrounds, captured the 35-lap mid-season championship late model stock car race Saturday night before a crowd of 7,027.

Montgomery's best finish in a main event here with a 1967 Chevelle was second on May 4. However, he had compiled 945 points to rank fourth going into Saturday's program.

The mechanical woes of Verlin Eaker of Cedar Rapids, Iowa, and Mert Williams of Rochester, Minn., aided Montgomery. Montgomery started in the front row with Eaker and had the lead until Eaker took over on lap 5.

Eaker stayed ahead until lap 17 when his 1967 Dodge developed engine trouble. Montgomery took the lead permanently.

Williams, one of the top drivers here, ran third for a while and was sidelined on lap 13 by heating problems.