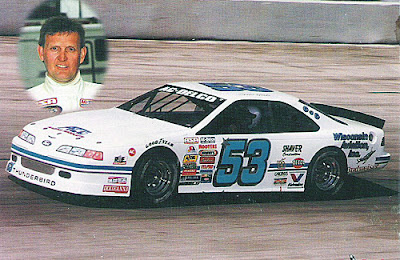 
Anderson, Ind. (August 21, 1993) - Scott Hansen survived a race of attrition to capture the annual Anderson 400 Saturday at Anderson Speedway.
Hansen took the lead for the first time on lap 358, getting around Kent Stauffer on the inside. He then drove his Chevrolet to a 1.41-second win.

It is the second time Hansen has won the Anderson 400. He captured the event for the first time in 1991. It marked his third win of the 1993 American Speed Association season.

The Green Bay, Wis., driver has three wins, three second place finishes and a third in the last eight races as he closed in on point’s leaders Johnny Benson Jr. and Mike Eddy.

Hansen came from a lap down to pick up the victory. On lap 53 Hansen suffered a flat tire and spun on the back straight. The pit stop cost him a lap.

He credited his crew with keeping him in contention for the win.

Being on the point was not a good place to be as Jay Sauter and Gary St. Amant both crashed while leading.

Behind Hansen and Stauffer was Tom Jones. Jones finished second in 1992 and followed it up with a strong run this year.

Brad Loney finished fifth to follow up on his third-place finish of a year ago. He was followed by Senneker and Joe Nott. Dennis Lampman, who won the last ASA race in Grand Rapids, Mich., placed eighth.

Many of the top contenders were forced to drop out of the 400-lap event because of mechanical problems. Dropping out before the halfway point were NASCAR Winston Cup drivers Ted Musgrave and Ken Schrader.

From the drop of the green flag, pole sitter Benson charged into the lead and remained on the point until lap 50 when Bob Senneker went to the front.


At that point, former Pendleton resident Tony Raines was running in second place, but was forced out of the race before 100 laps had been ran because of engine problems.
Senneker led until lap 146 when Mike Eddy took the lead, followed by Todd Forbes. But at the hallway mark Senneker was back In front, with Forbes running second, Eddy third and Sauter fourth.

Forbes remained among the top three in the field until lap 338 when he pitted. During the pit stop the crew was unable to get the jack under the car and then Forbes had the car roll off the jack. The miscue cost them a lap and resulted in a fourth-place finish.

Gary St. Amant took the lead on lap 280 and stayed in front until lap 348 when he cut a tire on his Ford Thunderbird and hit the back-straight wall.


That set up a 50-lap sprint between Hansen, Stauffer and Jones.