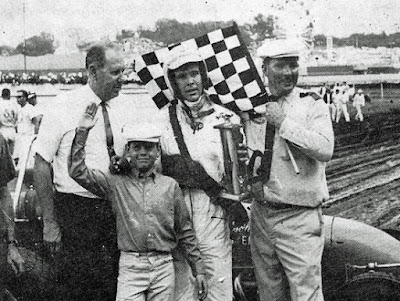 
Des Moines, Iowa (August 18, 1968) – The show must go on and it did on Sunday, but it took officials four attempts to get a rain-shortened IMCA sprint car program into first gear at the Iowa State Fair.
Once it began at 4:40 pm – it was scheduled for a 2:00 pm start – the program was continued at a record pace with Grady Wade of Wichita, Kan., marching away with the feature victory and the $750 first-place prize.
Three attempts were made to iron out the track, but each time the rain returned. At 3:30 pm it ceased long enough to prepare the soggy track and complete five of seven events.
But, rain began again during the feature and the scheduled 25-lap feature was shortened to 22. Also, the 5-lap trophy dash was eliminated because of the threat of bad weather.
Wade, driving the Chet Wilson Special – a Chevrolet-powered car, won his second feature in two days. He captured the feature at the Missouri State Fair in Sedalia on Saturday.
Wade started in the front row and led from start to finish. He was nearly one-third of a lap ahead of second-place finisher Bill Utz of Sedalia, Mo., when the checkered fell.
Two track records were broken.
Dick Sutcliffe of Greenwood, Mo., won the 8-lap first heat in 3 minutes and 20 seconds topping the previous mark of 3 minutes and 26 seconds set by Jerry Blundy on August 20, 1967.
Jerry Richert of Forest Lake, Minn., lowered the 1960 10-lap standard from 4 minutes and 15 seconds to 4 minutes and 7 seconds.
Ray Lee Goodwin of Kansas City, who won the National Super Modified Championship at Knoxville, Iowa, only eight days earlier, finished third in the feature and Richert was fourth. Jerry Blundy of Galesburg, Ill., rounded out the top five.
Merle Bettenhausen of Tinley Park, Ill., the son of the late Tony Bettenhausen, a star driver in the Indianapolis 500, won the second heat.