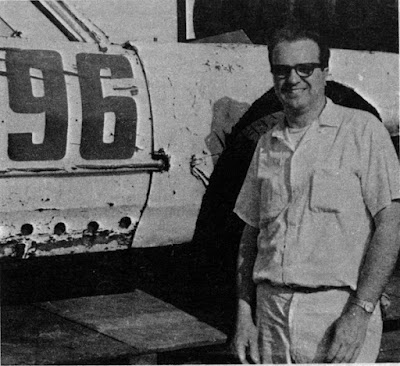 Owatonna, Minn. (August 23, 1969) – Mert Williams, receiving some unexpected help from crewman Jack Just, had no trouble winning the 50-lap feature race on a Minnesota Speedways, Inc.-promoted card at the Steele County Fair on Saturday afternoon.
The 34-year-old Rochester, Minn., driver, lapped all competitors in the 18-car finale at least two times. Jerry Pulver of Rochester, the runner-up, and Dave Noble of Blooming Prairie, Minn., third-place finisher, had completed 48 laps when Williams whizzed by starter Paul Tradup’s checkered flag.
The card attracted 3,744 fans, which was a Steele County Fair record for a Saturday afternoon grandstand program. The throng established a new MSI standard, breaking the old mark of 3,156 set at Rochester’s Olmstead County Fair on August 2, 1968.
Williams, on the basis on winning the first of three heat races, was awarded the pole position for the feature event on the half-mile clay track. The 34 entries - which included five Iowa entries and three Wisconsin entries – drew for heat positions.
Just, drawing for Williams, pulled out the “No 2” slip, giving the ace the all-important front row spot for the preliminary event.
“I always draw a high number so I let Jack do it this time,” Williams explained. “Starting in front, I didn’t have to battle the dirt and dust kicked up by the lead cars.”
Williams, driving a 1965 Chevelle, lapped Pulver the first time on lap 25 and then again on lap 49. Pulver, driving a 1967 Chevelle, started sixth in the feature while Noble, piloting a 1965 Chevelle, started tenth.
LeRoy Scharkey of Rochester, who started alongside Williams in the main event, was William’s chief challenger for the first six circuits. However, the MSI point leader experienced mechanical issues and pulled his 1967 Ford from contention.
Dave Bjorge of Austin, Minn., and Denny Nonnweiler of Mason City, Iowa, jockeyed for second after Scharkey’s withdrawal left a vacancy. Both succumbed to Pulver’s pressure at the midway point.