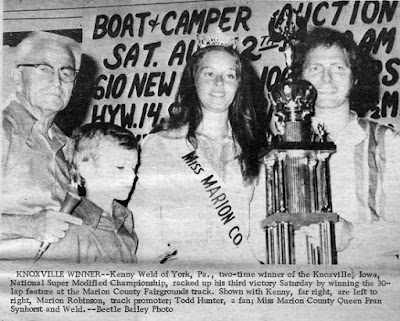 Knoxville, Iowa (August 12, 1972) – Kenny Weld of York, Penn., won the National Super Modified Championships at the Marion County Fairgrounds for the third time Saturday night, leading all but two of the 30-lap feature event before a crowd estimated at 10,000.

Weld, who also won the event in 1964 and ’65, led at the beginning until Billy Shuman of Tempe, Ariz., got past him on lap 4. Weld would regain the top spot two laps later and lead Shuman by nearly half-a-lap at the checkered.

Shuman and Lonnie Jensen of Lincoln, Neb., would duel for second place much of the race. Jensen, the weekly point leader at the half-mile dirt oval, would settle for third-place.

Weld, who also won the second heat, said, “I just forgot what I was doing when Shuman slipped ahead of me in the feature. He added, “But I didn’t drive this far to finish second. So, I just tromped down on the pedal and I was able to get back around him without any trouble.”

Weld had qualified second on Thursday night and started in the front row with fellow Pennsylvanian Buddy Cochran of Sharon.

Weld says he competes regularly at three tracks in his home area; He’s the point leader at Harrisburg and New Oxford, Penn., and second in points at Hagerstown, Md.

Two accidents on the third lap of the event eliminated four drivers, including Ray Lee Goodwin of Kansas City, Mo., the 1968 Nationals winner. Goodwin and a car driven by Bill Utz of Sedalia, Mo., collided on the backstretch. Utz’s car burst into flames but he escaped injury. Neither driver was injured.

Seconds before that crash, Earl Wagner of Pleasantville, Iowa and Darrell Dockery of Phoenix, Ariz., were involved in an accident which saw Wagner flip his sprinter. Neither man was hurt.