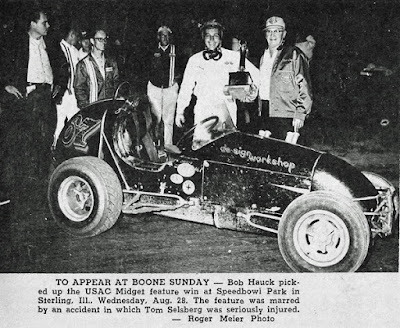 Sterling, Ill. (August 28, 1968) – Bob Hauck of Joliet, Ill., won the 40-lap United States Auto Club midget feature at Speedbowl Park on Wednesday night. Mel Kenyon, third place finisher at the 1968 Indianapolis 500, took runner-up honors.
The feature was marred by one serious accident on lap 3 when Tom Sellberg ran off the track in turn one and flipped end over end several times. Sellberg was taken to Community General Hospital and examined. He was transferred to Rockford Memorial Hospital with a fracture of the skull and cheekbone. His condition was considered critical.
Fast qualifier of the night was Dave Strickland with a time of 17.54 seconds on the third-mile dirt oval. Heat races were won by Mel Kenyon, Merle Bettenhausen, Bill Puterbaugh and Jigger Sirois. Bettenhausen also copped the semi-feature event while Sellburg won the trophy dash.
Results –