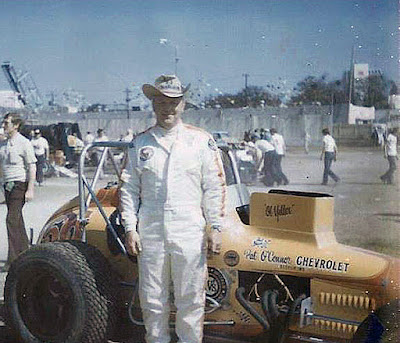 Des Moines, Iowa (August 17, 1975) – Jan Opperman of Noxon, Mont., was the first to cross the finish line on Sunday in the 30-lap International Motor Contest Association sprint car feature at the Iowa State Fairgrounds.
But, the left rear wheel was found to be illegal after Bill Utz of Sedalia, Mo., protested and Utz was then declared the winner.
Eddie Leavitt of Kearney, Mo., got most of the glory this afternoon. After he spun out (he claims Opperman was the cause of the mishap), Leavitt went to the rear of the 18-car field, then proceeded to work his way back up to second only to spin out again. And again, he claimed Opperman was the cause. He would recover one more time and finish fourth in the race.
“I wouldn’t have protested if Opperman hadn’t knocked Eddie out twice,” said Utz. “I don’t like to win races that way.”
Utz, who also won an IMCA-sanctioned feature Saturday at the Missouri State Fair, said he personally measured the width of the wheel after the race, then put up the $50 for the protest. The money would have been forfeited had Opperman been found legal.
Utz received $900 for his victory while Opperman didn’t receive a penny.
Race promoter Homer Melton said the wheel’s width was 12-3/4 inches. Twelve inches is the maximum under IMCA rules.
Opperman said his pit crew had changed the tires during a timeout following Leavitt’s first spinout. “They thought they were puting on a 11-3/4 inch wheel,” remarked Opperman. “But they got the wrong wheel.”
Ralph Parkinson Sr. of Wichita finished second and Johnny Babb of Ottumwa, Iowa, took third.