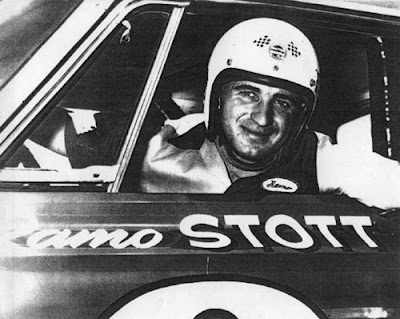 Sedalia, Mo. (August 29, 1965) - Ramo Stott of Keokuk, Iowa took down top honors in Saturday’s Missouri State Fair “International” feature for late model stock cars after a blown engine ended a 98-lap duel between Stott and fellow townsman Ernie Derr. More than 14,000 saw the race.
The race was run as scheduled despite a tragic accident during the cars’ warm up laps, which fatally injured four spectators and hospitalized seven others.
The mishap occurred when a 1964 Dodge, driven by Bill Crane of Kansas City broke a ball joint going into the first turn and plunged into a chain link fence where non-paying spectators had gathered despite efforts of highway patrolmen to keep the area clear.
It was the first such accident in the more than 50 years of auto racing at the fair.
Earlier in the day, under dripping skies as the drivers awaited the go signal, talk in the pit area got around to safety measures to prevent such accidents.
“Both Ernie and I generally change to new ball joints after each race,” said Ramo, adding, "and then sometimes they break. On a half-mile track such as this one you’re not able to go fast enough to get into serious trouble.”
“But on a mile track like Sedalia’s - I clocked a 120-mile an hour lap during the race - if a ball joint breaks at that speed, you’re in real serious trouble.”
“There was nothing Crane could do once he flipped,” said Stott.
“Due to the tremendous stress, we beef up the critical parts of our cars, for without safety equipment the cars would break up fast. We've all had parts break on us at one time or another.”
“That’s one reason IMCA tracks are double fenced on all corners. People just don’t seem to believe a car can get through one of those chain-linked fences. They jammed inside of the second fence here without warning.”
Stott, who had set a new lap world record for mile tracks during qualifying, took the lead on the start and was trailed closely by Derr until lap 21, when Derr forged ahead in heavy traffic.
Derr led until lap 39, when the pair swapped the lead three times in as many circuits, Stott finally getting it back on lap 41.
On lap 49 both pitted, going in and out almost simultaneously and Stott keeping his slender lead.
Ramo kept his 1965 Plymouth out front until the 86th lap, when Derr wheeled his new Dodge to the inside on the first corner and got past Stott, who in going wide hit the guard rail a light glancing blow which did not slow him down.
Derr then looked like a winner until the 91st lap when the car began smoking badly, due to a ruptured oil filter, and on lap 98 the engine seized, giving Stott a clear way to victory.
Second went to Ed Negre of Monett, Mo., in a car owned by Stott; Derr was third and Lewis Taylor, Shawnee, Kan., Blaine Morrow, St. Paul, Minn., were fourth and fifth, respectively.