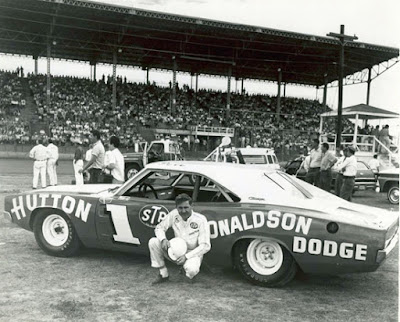 Des Moines, Iowa (August 16, 1969) – The older Ernie Derr gets, the faster he goes.
The ageless International Motor Contest Association new car champ did it again on Saturday afternoon at the Iowa State Fair with a runaway in a grueling 200-lap IMCA stock car grind.
The 47-year-old Keokuk, Iowa, chauffeur, lead-footed his 1969 Dodge Charger to checkered laurels ahead of Fred Horn of Marion, Iowa, and Lewi Taylor of Shawnee, Kan., who finished second and third respectively.
Derr withstood a stiff challenge from Irv Janey of Cedar Rapids, Iowa, for three-quarters of a hot, humid 100-mile race before Janey’s ’69 Charger ran out of gas and coasted to a stop in the infield.
Janey had swapped the lead with Derr twice at the halfway point of the race before his machine coasted to a halt with less than 25 circuits remaining.
Derr poured it on in the final minutes of the race and took the checkered flag with better than two laps distance between him and the second-place car.
Derr also set fast time in qualifying, topping the field of 25 new model stock car entries. Derr turned the half-mile oval in 26.01 seconds to set fast time. He also won the STP trophy dash.
Derr got an added bonus out of the race when his young son, Mike Derr, piloted his Charger to a fourth-place finish. It was only the second race of young Derr’s career.