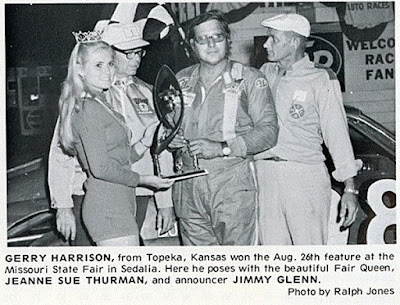 Sedalia, Mo. (August 26, 1972) – Gerry Harrison of Topeka, Kan., broke away early and then held off a pair of late rushes to capture Saturday night’s International Motor Contest Association 25-lap late model stock car feature at the Missouri State Fair.
Harrison, piloting a 1972 Ford Torino, grabbed the lead on the fifth time around the half-mile oval and wasn’t pressed until Fred Horn of Marion, Iowa, moved in behind him on lap 17. Horn, Saturday afternoon’s 100-mile feature winner, started in the eighth row, moved up steadily, and nearly had his 1970 Plymouth in the lead when he spun out of contention on lap 19.
Gary Brooks of Grand Prairie, Tex., came in second, and with the aid of a yellow flag late in the race, was able to make things closer at the checkered for Harrison.
Jim Hagar of Liberty, Mo., Shorty Acker of Windsor, Mo., and Dale Roper of Rolla, Mo., finished third, fourth and fifth respectively.
Heat race winners were Acker, Hagar and Hal Conn of Fulton, Mo., while Don Cooper of Sedalia, Mo., won the consolation.
Harrison’s victory strengthened his hold on second place in the IMCA point standings and shortened the gap between him and leader Irv Janey of Cedar Rapids, Iowa. Janey was shut out for the day due to mechanical difficulties.