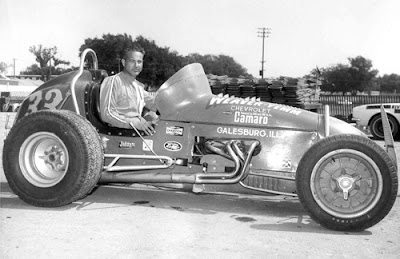 
Knoxville, Ill. (August 4, 1967) – Jerry Blundy of Galesburg, Ill., and Tom Corbin of Carrollton, Mo., divided the honors in the IMCA-sanctioned sprint car races at the Knox County Fair on Friday night before a packed grandstand.
Blundy won the hard-fought 20-lap feature event after a hard tussle with Corbin who took the lead from Blundy through the turns in the last five laps but couldn’t hold it and had to be satisfied with second place.  Blundy came from the last starting spot in his heat race to the front of the field on the first lap.
Corbin turned in the fastest time out of a field of 19 cars with a clocking of 25.42 seconds on the big half-mile. Corbin also came from his last starting spot to pass Jim Moughan of Springfield, Ill., on the last lap to win the first heat. Corbin was also the winner of the four-car 5-lap trophy dash.