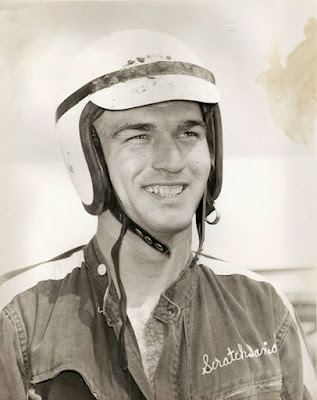 
St. Paul, Minn. (August 25, 1963) – Jerry Daniels did it again at the Minnesota State Fair IMCA sprint car races on Sunday afternoon.
The 25-year-old hotshoe blasted to his second consecutive feature win and established himself as the man to beat in the remaining days of sprint car competition at the nation’s biggest state fair.
Starting sixth, Daniels made it look easy as he took the lead going down the backstretch on the first lap. He would go unchallenged for the rest of the event. Finishing second was Sonny Helms in the Colvin-Young Chevy while third place went to Red Amick in the Fetter Aluminum Chevrolet.
The afternoon’s events were marred by one spectacular accident, which fortunately resulted in to injuries. In the semi-main, Dick Gaines got sideways and flipped his Diz Wilson #71 Chevy in the third turn. The study roll bar did its job and Gaines emerged unscathed.
Last year’s big money winner, Jerry Richert, spun out in the feature. Richert ran the McDonald sprinter Saturday with an Offy engine but switched to a Chevy power plant for Sunday’s races.