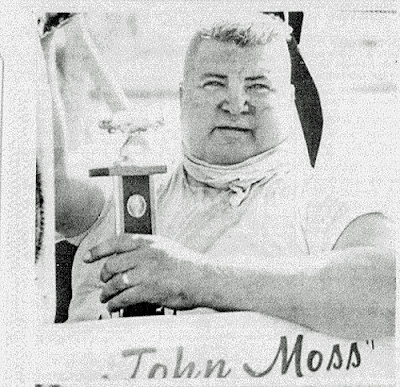 Montgomery stayed within a few inches of Moss’ rear bumper for most of the 25-lap race, had momentary leads over the Iowa City driver on a few occasions, but couldn't take control. On his last bid for the lead as the cars came out of the final turn on the last lap, Montgomery pushed too hard and spun into the infield. He regained control but dropped to fourth place at the checkered flag.

Moss had torn his pants getting into the car for the race; and for obvious reasons, received the winner’s trophy while seated in the car.

Bill Holder, Ames, got some unwanted help during the first heat of late model competition. Coming out of number three turn, Dave Chase, Council Bluffs, nosed into Holder’s car. Chase then got a boost from Don Davidson, Des Moines, who just got by Holder without major incident as the Ames drive spun around.

Holder ended up in the infield but came back for a fifth-place finish in the heat race, qualifying him for the feature event. In the main event, he placed 10th.

The sportsman semi-main was the most grueling of the afternoon on the machinery. Of the 16 cars eligible for the event, four scratched before the race started.