1959 – Cleburg Roars to Victory at Sedalia 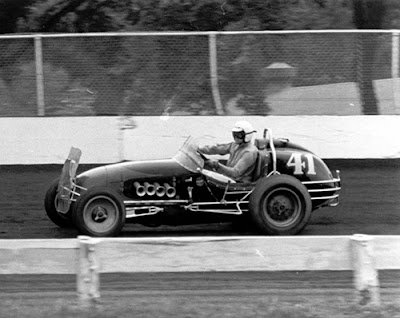 Bob Cleburg behind the wheel of the Lyle Hyneman Offenhauser.


Sedalia, Mo. (August 22, 1959) – Bob Cleburg of Tucson, Ariz., setting his eye on the checkered flag early in the Missouri State Fairgrounds big car feature, roared to victory in a race marred by a spectacular five-car crackup and lesser mishaps, which kept the more than 12,000 fans in attendance tense with excitement Saturday afternoon.

Cleburg, starting on the third row, slashed past front-running Jim Hurtubise of Lenox, Calif., and Elmer George of Speedway, Ind., on the second lap and was never headed, despite the fact that the race was stopped twice to clear damaged machines from the track.

Jerry Kemp of St. Louis, Mo., was hospitalized with apparently minor injuries sustained when his car struck the spinning mount of Arnie Knepper, Belleville, Ill., setting off a five-car crash.

Ned Kirkpatrick, close behind Kemp, struck both cars, his sprint hurtling high into the air. Bill Holland, swerving to miss the wreckage, was hit by an unidentified car and went into a sideways roll.

Holland, the 1949 Indianapolis 500 winner, was unhurt. Kirkpatrick suffered burns on one hand and Kemp sustained facial cuts. Knepper, too, was unhurt but all cars were badly damaged and unable to continue.