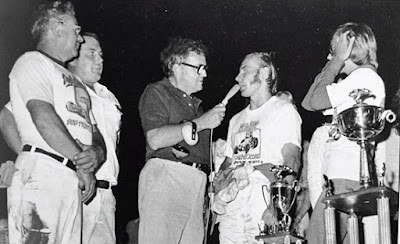 Knoxville, Iowa (August 13, 1977) – Doug Wolfgang of Des Moines capped off a record setting year at Knoxville by taking the 17th annual Knoxville National Sprint Car Championships on Saturday night.
Wolfgang, the polesitter, jumped into the lead on the first lap but relinquished it to Bobby Allen of Hanover, Penn., in turns three and four who started on the outside of row one.
On the lap 2, Wolfgang got by Allen entering turn three and it was his race the rest of the way. For Wolfgang, it was his 34th feature win of the season and 11th in 15 starts at Knoxville.
Most (31) of the feature wins have been in cars owned by Bob Trostle of Des Moines or Gary Mussato of Osage, Kan.
Wolfgang, in becoming the first Iowa driver to win the Nationals, picked $4,500, but with lap money and contingencies, Wolfgang unofficially collected $7,550.
Wolfgang certainly was not the whole show. Leland McFadden of Tempe, Ariz., finished second in the event after starting 13th. McSpadden had moved to fourth by lap 10 when the yellow came out for Gary Patterson. McSpadden moved into third and two laps later, took over second place for good.
Bubby Jones of Danville, Ill., put on an equally good show as well, finishing in third after starting on the outside of the fourth row.
Fourth place went to Bobby Marshall of Dallas, Tex., and fifth went to Bobby Allen.
Sammy Swindell would finish eighth, closing the book on a super performance from the young driver from Bartlett, Tenn. The youngster finished second in both the “C” trophy dash and “C” main. The second place showing in the “C” put Swindell on the tail end of the “B” main. He proceeded to win that race, going to fifth by the fourth lap, third on lap 10, second on lap 12 and he took over the front spot on lap 15. The first-place finish put in the rear of the “A” main where he passed 19 cars to finish eighth.