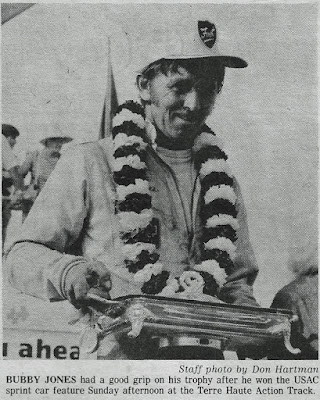 Terre Haute, Ind. (August 5, 1979) – Bubby Jones continued his domination of USAC sprint car races at the Terre Haute Action Track Sunday afternoon, by guiding his Siebert Olds racer to victory in the division’s 40-lap main event.
The win was Jones’ fourth in the circuit’s last five features at the track. His only non-winning performance during that time came in last May’s Hulman Classic, when he flipped his mount while leading the race.
Jones started Sunday’s main event from the 12th starting spot on the grid, after timing in only 12th fastest and finishing third in his heat.
Polesitter Billy Cassella jumped into the lead at the start and held the top spot until Paul Pitzer, the fastest qualifier, took over. Cassella regained the front-running position on the fourth go-round, but two laps later, Pitzer was back in front.

Jones moved into the lead on lap 19 and Dana Carter, who started on the outside of row two, pulled into second place on the following circuit.
However, Carter’s hopes ended on lap 35, when he spun, allowing Gary Bettenhausen to claim the runner-up spot.
Although Bettenhausen appeared ready to seriously challenge Jones for the lead a couple of times, he was unable to improve his position and settled for second place.