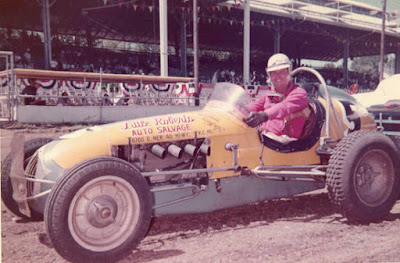 Herschel Wagner waits to be pushed off before the start of the 20-lap feature at the Nebraska State Fair. - Museum of American Speed Collection


Lincoln, Neb. (August 31, 1958) – One of Bobby Grim’s favorite maneuvers failed on Sunday afternoon and the IMCA champion finished out of the money in the Nebraska State Fair feature race.
As a crowd of 18,000 watched on, Grim went high on the track in the final turn of lap 6, holding a comfortable lead over the field.
But his “Black Deuce” failed to complete the turn and Grim slammed into the guard rail, breaking a wheel and flattening a tire
That was it for Grim, winner of two previous races that afternoon.
It opened the gate for victory for Herschel Wagner of Hickman Hills, Mo., in the 20-lap feature.
The same method of negotiating the curves had helped Grim win his two earlier races and build a half lap lead over Wagner and the other drivers prior to the accident.
Wagner went on to an easy triumph over Jerry Blundy of Galesburg, Ill.
The top qualifying mark for the afternoon belonged to Bob Cleburg of Tucson, Ariz., with a time of 29.53 seconds.
Grim won the first heat and the match race while Wagner and Cleburg won the second and third heats respectively. Red Hoyle of Colona, Ill., won the Australian Pursuit.