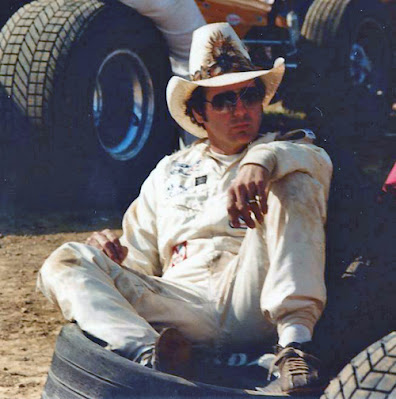 Rossburg, Ohio (April 1, 1973) – George Snider is known for his love of dirt track racing, but Sunday afternoon at Eldora Speedway he proved he is a rather good mudder as well.

Driving with a stiff upper lip, compliment of a stray rock he picked up early in the race, Snider passed troubled Johnny Parsons on lap 38 and went on to edge Parsons by a scant nose in the United States Auto Club 40-lap sprint car feature.

Eldora promoter Earl Baltes April Fooled the weatherman in this one.

Two days of rain preceded Sunday’s event, and the track looked it. The pit area resembled the Okefenokee Swamp.

But “Earl the Pearl” hopped on his trusty grader and had the track looking like a baseball diamond after two days of rain.

In other words, the racing surface still was not the greatest, but it was raceable.

The track, though, soon started developing aggravating ruts from the constant pounding of the cars. And the races had all the appearances of a rodeo with the sprinters jostling the drivers as though they were trying to buck them.

Billy Cassella hit the wall in turn two of the second lap of the feature and his car flipped twice. Cassella was unhurt. But the race was reflagged and had to be restarted.

Sammy Sessions, the defending USAC sprint car king took the lad from Parsons on the second lap of the restart and began pulling away from the field in impressive fashion.

Former titlist Gary Bettenhausen then found the right groove and stormed into second place on lap 15 and began bearing down on Sessions. On the next lap, however, Bettenhausen bored down on the pits stayed there the rest of the afternoon with mechanical woes.

Sessions, meanwhile, began smoking on lap 20 and was finally black-flagged on lap 22. This put Parsons back into the lead.

Although his car was coughing badly, Parsons somehow managed to fend off the challenge of Rollie Beale, who ate too much mud and got indigestion.

Finally, here came Snider, passing Beale on lap 35. Then between turns one and two, Snider took the high ground and got past Parsons.

There was no beating the hard-charging Snider after that, although Parsons gave it a good try, coming within what starter Ray Chakie said, “must have been two feet” at the finish.