1974 – Carter has Victory in Winchester Sprints 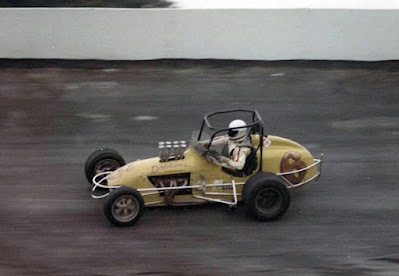 A brief rain shower, timing light problems, and three uneventful accidents slowed the program down somewhat, but the crowd of nearly 5,000 waited it out in fine fashion.

Carter, who started fifth, had chased the fast-moving Tom Bigelow of Whitewater, Wis., from the 14th lap and finally moved under him coming off the final turn on the 37th circuit.

Carter’s win moved him into second place behind point leader Jan Opperman, who finished 12th in his first -ever appearance at Winchester. The victory netted the popular driver $1,250 out of a total purse of $8,449.

Bigelow just missed breaking the one-lap qualifying record held by Lee Kunzman at 16.23 seconds, with an official clocking of 16.30 seconds. However, on Tom’s second trip around the high-banked half-mile, the clock malfunctioned and missed his fastest time.

Several watches clocked him at 16.19 seconds, which would have been a new track record.

Roger Holman, president of Winchester Speedway, gave Bigelow a $100 bill and his sincerest regrets that Tom was unable to be the official world’s half-mile record holder. Holman announced he would give $500 to the driver who breaks the record and will give $1,000 to the first driver to break the 16-second barrier.

Bigelow did, however, set a new 8-lap mark with a time of 2 minutes and 15.98 seconds, eclipsing the old mark held by Larry Dickson since 1969.

All eyes, however, were on the USAC point leader, Opperman, who had his introduction to asphalt and the high banks, all in one day.

He backed not the feature when two other cars scratched from the field. When cars dropped out through the race, he found himself finishing in 12th. Most observers agreed that “Opp” would need more seat time on pavement.