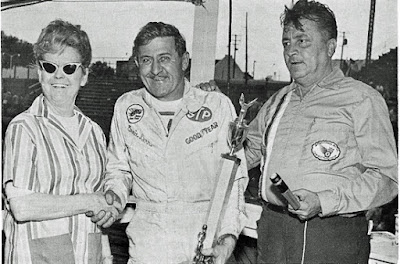 Shreveport, La (April 13, 1969) – The annual Pelican 200, which was run Sunday afternoon at State Fair Speedway, was another case of the rich getting richer.

The field was cut short due to heavy rains. Only 13 cars competed.

Derr turned the 100 miles in 1 hour, 56 minutes and 3 seconds, a relatively slow time ordinarily, but not bad considering the track conditions.

Lewis Taylor of Shawnee, Kan., finished second and held that position all the way, and one point held the lead briefly when Derr pitted.

In fact, Wall didn’t make the third spot until Ron Hutcherson of Keokuk, Iowa, pitted with 10 laps left in the contest.

Taylor pocketed $500 for his runner-up effort while Wall collected $400.

In all, it was a good day for the veteran from Keokuk, Iowa, who is the winningest stock car driver in the history of racing.

The race was delayed an hour while crews worked on the track. But the IMCA officials, headed by Bill Hitz and Nick Nachicas, were determined to give the 6,500 fans who came out in poor weather a show.