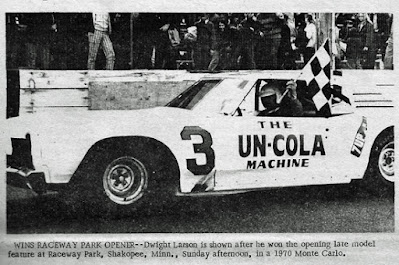 Stewart’s elation had many reasons for being evident. Fans took to the remodeled features of Raceway Park and race cars were out in record numbers with 27 late models and 64 hobby stocks signing in for a total of 91 machines.

The afternoon program was practically accident-free causing Stewart to note, “Drivers appeared to be in mid-season form and there was no question everyone was faster than a year ago.”

The Larson-Jusola duel set the stage for Sunday afternoon’s first meet of the season at Raceway Park. It all started when Larson, driving the UnCola 1970 Monte Carlo, made famous last year by Bud Helm, outlasted Bob Jusola’s early heat race challenge that brought the huge crowd to its feet. Jusola returned later to sweep the trophy dash.

In the 25-lap finale Larson had the pole position with Jusola starting two positions back and converted hobby stock driver Leon Duda in between.

Duda, the pride of Hopkins, Minn., racing fraternity, managed run second for 10 laps in his 1964 Ford Fairlane before slipping back to third-place.

But the race, for all practical purposes, was between Larson and Jusola with the two drivers racing side-by-side, bumper-to-bumper the entire time with only the length of a fender separating Larson advantage at the finish.

Prizborowski took the 15-lap semi-feature after coming from the back of the pack to first place. Larson, Duda and Graves won late model heat races.

A great field of hobby stocks found Mylan Erickson of Minneapolis the feature winner with Arlo Lempke of Hutchinson, Minn., taking second and Joe Ritchie of Minneapolis in third. 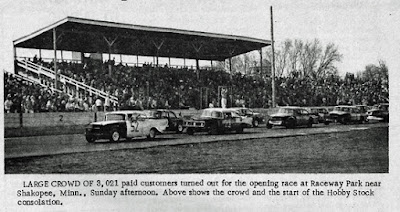