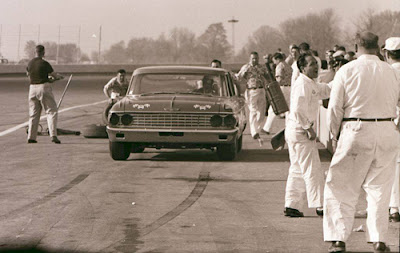 Norm Nelson pits during the running of the 200-lap USAC stock car race at IRP. He would go on to win the event.

Nelson shot into first place when race leader Len Sutton of Portland, Ore., blew a tire on his 1961 Pontiac. Earlier, Paul Goldsmith of St. Clair Shores, Mich., had been forced out of the race by mechanical troubles after leading the first 141 circuits.

Goldsmith qualified for the pole position at 80.07 miles per hour, a new track record.

Another accident sidelined A.J. Foyt of Houston, Tex., the 1961 Indianapolis 500 winner. Foyt was riding in second place when his 1961 Pontiac blew a tire a crashed against the outside wall. Foyt was not hurt.