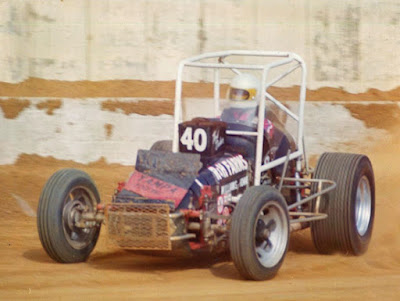 Topeka, Kan. (April 28, 1973) – Bill Utz’s misfortune turned out to be Thad Dosher’s big break Saturday night in the sprint car opener at the Mid America Fairgrounds, and the Topeka, Kan., driver made the most of it to claim the 30-lap feature and the $500 top prize that went with it.

Dosher and Utz were battling for second place midway through the contest, while Dick Sutcliffe of Greenwood, Mo., the pole starter, was making off with the contest in relatively easy fashion.

On the 17th lap, Darryl Dawley of Sioux Falls, S.D., spun in turn four. Utz didn’t see him in time to dodge, clipping the front of Dawley’ car, causing hi own to roll, taking him out of action.

On the restart, Dosher inherited second place and the new ball game ate up all of Sutcliffe’s lead.

Dosher tried to pass on the first lap of the restart, but Sutcliffe held him off and then built up a nice little lead through the next two circuits.

But on the 20th lap Dosher closed the gap. The two went down the backstretch on the 21st lap side-by-side. Dosher was on the outside and rode the rim of the track through the turns and got his R&H Farms Special ahead coming down the homestretch.

After that, the battle was for third, with Ray Lee Goodwin of Kansas City losing it, then regaining it from Don Mack of East Grand Forks, N.D.

Gene Gennetten of Gladstone, Mo., rounded out the top five.

Dosher started eighth in the 20-car field and quickly move to third after only nine laps to set up the struggle with Utz, of Sedalia, Mo., which ended in disaster for the Missourian.

Dosher and Sutcliffe each won a heat race and demonstrated in those short tests that their machines were the class of the 55-car field which broke all records at the half-mile track for entries.
Results –