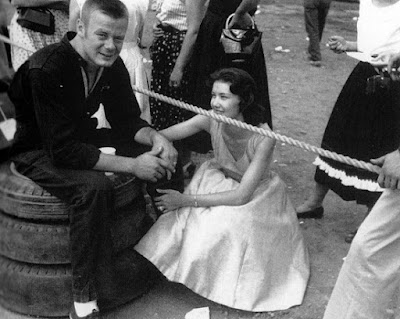 Jerry Hoyt relaxes with his fiancé Diane Baker before the start of the AAA big car race in Oklahoma City. Tragically, Hoyt would lose his life at the same track only three months later.

Oklahoma City, Okla. (April 10, 1955) – Jerry Hoyt of Indianapolis came from behind twice Sunday night to win a muddy decision in the AAA big car feature at the Oklahoma State Fairgrounds.

A crowd of 5,250 patiently sat for more than nine hours while track workers struggled to get the racing surface back in shape after morning rains had made racing impossible.

The seven-race card was scheduled for Sunday afternoon but because of the conditions, officials were forced to postpone time trials until 7 pm.

Hoyt, one of the youngest drivers on the AAA circuit, grabbed the lead on lap 11 of the feature only to lose it two laps later when he narrowly avoided a flip in the north turn.

Mike Nazaruk, North Bellmore, N.Y., and Bob Sweikert of Indianapolis ran one-two from the start of the race until Hoyt took the lead. Two laps later they were back in front as Hoyt came out of the turn too fast and bounced up into the crash wall.

After straddling the wall for some 50 feet, Hoyt’s car careened back onto the track and zig-zagged down the front straightaway before he could bring it back under control.

However, he again put pressure on the leaders and once again, got around both Nazaruk and Sweikert on lap 18 to go ahead and stay there the remaining 12 circuits.

Hoyt started the night on the right foot by setting a new track record in time trials with a time of 24.82 seconds. He qualified for the feature by finishing third in the opening heat race, won by Nazaruk.

The crowd sat patiently throughout the afternoon as workmen, drivers and officials graded and tested the track. Three graders bladed all afternoon long and on two occasions, volunteers came out of the grandstands to drive passenger cars around the track in an endless procession.

Late in the afternoon, several drivers made trial runs on the track and decided it still wasn’t safe for competition. By this time, it was 5:15 and officials begged the indulgence of the customers and postponed the time rials until 7 pm.

The reaction of the crowd to this decision was mild and AAA dignitaries here for the race were prompted to call Sunday’s audience “the most patient crowd we’ve ever seen.”