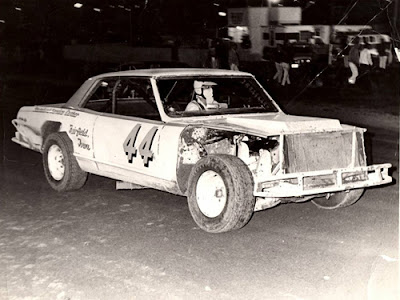 Columbus Junction, Iowa (April 25, 1970) – Mark Mosier of Washington, Iowa, battled Pokey West of West Chester, Iowa, here Saturday night for first place in the feature event. As the checkered flag came out, Mosier crossed the finish line with West on his back bumper.

A crowd of about 3,600 race fans were on hand to see the Mississippi Valley Speed Club open the season and the old weatherman was on our side with beautiful weather.

In time trials, John Moss of Iowa City turned the one-half mile oval in 28.25 seconds. Mosier had the second fastest time at 28.78 seconds and West was third quickest at 28.85.

The trophy dash gave fans a good idea of what was to come as West and Mosier battled for the lead in the 5-lap event. Mosier took the lead on lap 4 only to lose it to West coming out of the fourth and final turn.

Moss won the first heat and Mosier took the checkered flag for the second heat. Bob Helm of Rochester, Iowa, won the third heat and Gary Thomas of Washington came through in the fourth and final heat race.

Ken Boyse of Wellman, Iowa, a new driver this year, had a little trouble in the second heat race as he was coming out of turn two and rolled his car. He was not injured but his car was scratched for the rest of the evening.