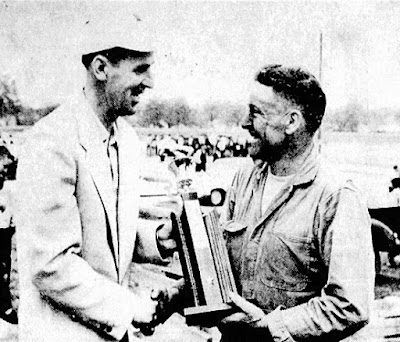 Shreveport, La. (April 3, 1960) – Defending IMCA national champion Ernie Derr of Keokuk, Iowa, chopped nearly half a minute off the world record as he wheeled his 1957 Pontiac to victory in the 250-lap Pelican championship race for late model stock cars Sunday at the Louisiana State Fairgrounds.

The crowd of 9,638 – the largest in the history of the event – looked on as Derr’s steady #1 car started from the back row of the 16-car field and steadily moved to the front.

The 39-year-old Derr grabbed the lead for the first time at the wire winding up lap 133 when another Keokuk neighbor, Dick Hutcherson ducked his 1957 Pontiac into the pits for gas.

From that point on, Ernie never relinquished the lead, but his two mighty Keokuk neighbors made it mighty tough.

Hutcherson lost a little time in the pits but charged right back. At that point it was a three-car race between Derr, Stott, driving a 1960 Ford convertible, and Hutcherson.

It looked bad for Derr, who had not made his stop for gas yet. But then – on the140th lap -Derr got a break. Phil Cronin’s 1957 Ford lost a wheel in the third turn and the yellow flag came out.

That was all Derr needed. He shot into the pits, gassed up in less than 15 seconds, and slipped back on the track; his absence practically unnoticed.

And with the slow pace that ensued until lap 145, when the green flag finally fell again, Derr wasn’t hurt a bit.

First place honors were worth $600 in prize money to Derr, with Stott hauling off $400 for second place and Newt Bartholomew of Carlisle, Iowa, hanging on for third and $300 in his ’57 Chevrolet.

No less than seven cars held the lead at one time or another during the grind.

Sonny Morgan of Beaumont, Tex., got off fast and held the top spot for the first 13 laps. When Morgan’s ’59 Chevrolet went dead after the 13th circuit, Dub Rollins of Corpus Christi, Tex., took over. Rollin’s reign was brief, and Hutcherson overhauled him at the start of lap 17.

Hutcherson and Darrell Dake of Cedar Rapids, Iowa, got tied up in a duel and Dake would power his ’60 Chevrolet past Hutcherson on the back straightaway on lap 42. But Hutcherson would regain the lead a lap later and hold Dake back, this time until lap 69. This time Dake meant to keep the lead and did – until lap 101 when his engine overheated, causing hm to take a pit stop which would cost him nine laps.

Stott moved ahead of Hutcherson on lap 105 and was showing dazzling speed in his shiny black convertible. But on lap 111, Stott spun coming down the front straightaway, with Hutcherson and Derr bearing down on him. Miraculously, Stott was able to get his car off the track and he used the unscheduled interlude to gas up. But he never saw the lead again.

Hutcherson took over, then moved aside at the 133rd when he stopped for gas.

That’s when Derr took over. But Hutcherson got back into the thick of the battle and overhauled Stott for second on lap 157. They ran 1-2-3 until lap 193 when “Hutch” spun out and bounced off the fence, heading into the grandstand. That was the end of the race for him.

Dake was the fastest qualifier in time trials, turning the half-mile in 28.18 seconds.