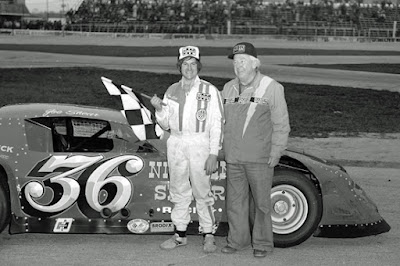 It was the third ARTGO triumph for Shear, a former six-time Rockford driving king.

Pat Schauer, who started on the outside of the front row of the 20-car field, opened up a commanding lead which he maintained despite the appearance of three yellow flags during the initial 25 laps.

Schauer was still on top with 26 laps down, but then his mount lost oil pressure, sending the young charger to the sidelines.

Campbell, who had been running second, inherited the lead when Schauer departed. However, Trickle, Shear, Sauter and Larry Detjens were rapidly moving towards the front of the pack.

Detjens, the afternoon’s fastest qualifier, saw his bid for the lead sour on two occasions when he looped his Camaro in minor incidents.

Campbell kept his Camaro in front until lap 47 when Shear powered underneath him to take the top spot.

Detjens, who twice had to come from the rear of the field, set his sights on the number one position, taking fourth from Campbell on lap 53, third from Sauter on lap 55 and second place from Trickle on lap 57.

The final 24 circuits saw Shear and Detjens wage a fierce battle for first place, rubbing fenders with one another numerous times.

When the checkered dropped, Shear had a car-length advantage over Detjens with Trickle a like distance behind Detjens.