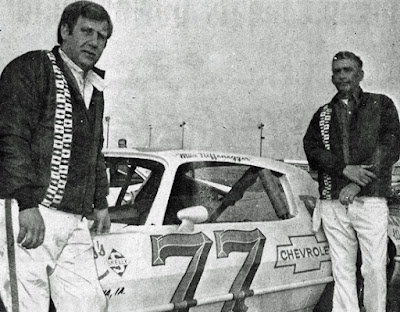 West Liberty, Iowa (April 20, 1974) – The rains held off until the finish Saturday night and so did Mike Niffenegger’s Camaro, as he waited until the white flag waved, then passed leader Ron Weedon of Pleasant Valley, Iowa, to capture the late model season opener at the Muscatine County Fairgrounds.

The program was under the supervision of Super Stocks, Inc., with Dale Gegner at the helm.

The capacity crowd witnessed a lot of action throughout the evening, but the thrill of the night was Niffenegger on the bumper of Weedon for 19 circuits in the feature event, then when the white flag was dropped by starter Engel DeKock, Niffenegger knew it was now or never, and took to the inside of Weedon and led the remainder of the way to capture the checkers.

Weedon and Niffenegger also had the top two times in qualifying, with Weedon setting fast time on the half-mile oval at 25.23 seconds. Niffenegger’s time was 25.30 seconds with Darrell Dake of Cedar Rapids third quickest at 25.39 seconds.

Bill Hopp of Muscatine took home honors in the first heat while Niffenegger won the second heat. Bill McCardle, coming all the way from Shullsburg, Wis., took home the victory in the third heat.

The Australian Pursuit saw John Connolly of Delhi grab the victory while Ken Walton of Cedar Rapids was tops in the semi-main.

The street stocks saw Dave Birkhofer of Muscatine take the win over Don Sterba of Iowa City and Willie Dee of West Liberty.