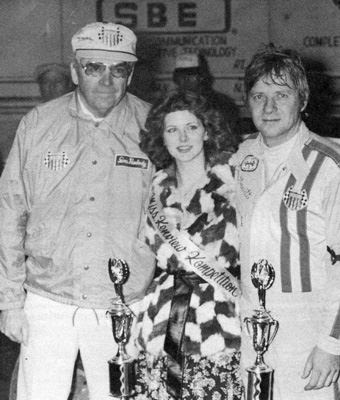 Eddie Leavitt is joined by USAC official Don Peabody after winning the 40-lapper at Reading.

Leavitt, last year’s sprint division rookie-of-the-year, started the feature on the pole position and led all 40 circuits around the half-mile dirt oval to pick up the win.

Ron Shuman, Dick Tobias, Gurney, and Rich Leavell followed Leavitt to the finish line and round out the top-five in the non-stop event.

The victory was the second USAC feature win in Leavitt’’ career. His previous victory came in a 50-lapper at Eldora Speedway in Rossburg, Ohio, on October 9, 1977.