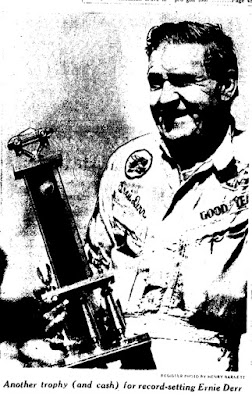 Des Moines, Iowa (August 22, 1970) - Ernie Derr made it look easy as he wheeled his 1970 Dodge Charger to a one-lap victory in the 200-lap new model stock car race in record time at the Iowa State Fair Saturday afternoon.

The 48-year-old Keokuk veteran, who won the event, a year ago and had set the old course record in 1967, easily out-sped Ron Hutcherson of Keokuk and Irv Janey of Cedar Rapids before a crowd of 11,200.

He took the lead for the first time on the 54th lap, moving ahead of Janey, and held it for all but eight laps after that.

Janey moved in front on the 92nd go-round but Derr passed him again at the start/finish line and held to the finish, not even losing his lead when he made a gas stop at the 126th lap.

Derr also shattered a record in the time trials with a clocking of 25.23 seconds. Dick Hutcherson of Keokuk had set the old one of 25.83 seconds in 1967 and four others besides Derr were below that in the trials - Fred Horn of Marion, Ron Hutcherson, Janey and Mel Morris of West Liberty.

Morris was in front through much of the early going, losing the lead to Janey on the 47th lap.

The field was slowed for just two laps when Harlan Conn hit the wall and by a minor spin out.

With Derr far ahead of the pack in the last third of the race, Hutcherson and Janey put on a battle for second with Hutcherson moving ahead on the 73rd lap and holding it to the finish.