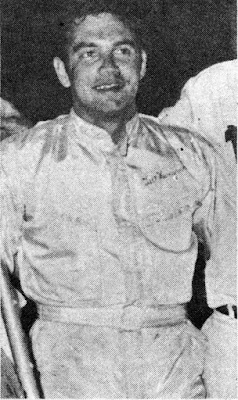 Cedar Rapids, Iowa (August 6, 1966) - Young Lee Kunzman finally made it a BIG night for himself by winning his first late model modified stock feature of the year Saturday night at Hawkeye Downs.

A crowd of 4,800 was on hand for the races and they witnessed some excellent driving the 25-lap feature.

Kunzman, 24-year-old from Guttenberg, started in eighth place in his 1966 Chevy convertible but closed the gap rapidly on leaders Ray Guss of Moline and Bill McDonough of Cedar Rapids before grabbing the front spot on the 11th lap.

From there it was simply a battle for second - won by McDonough - with Darrell Dake charging across the finish line a mere headlight ahead of Guss for third.

Kunzman, who also copped the B Semi, was elated over the feature win. “It just felt great,” he said, adding, “Things finally got going right for a change.”

McDonough also enjoyed a big night for himself, although the popular driver is yet to win a feature at the Downs this year. Bill won the first heat and also the A semi besides taking second in the feature.

Dake and Dean Montgomery of Milan, Ill., were other modified heat winners.