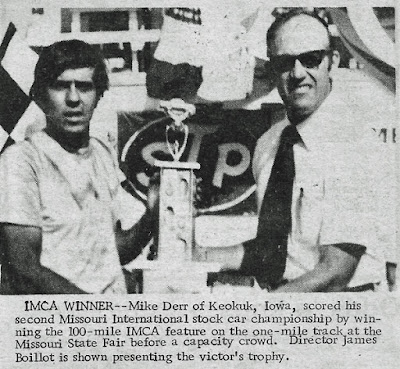 Sedalia, Mo. (August 23, 1975) – Before a capacity crowd in the main grandstands and a well-filled bleacher section, Mike Derr of Keokuk, Iowa, won the 100-lap feature on the one-mile track at the Missouri State Fairgrounds on Saturday afternoon.

Derr, the eldest son of 12-time IMCA stock car national champion Ernie Derr, timed in his dad’s 1969 Dodge Charge sixth fastest of the 39 qualifiers but drew the pole position at the start of the 100-mile race since the top six qualifiers were inverted in the lineup.

Derr would be the early pace-setter in the contest until “Super” Joe Wallace of Kansas City took over on lap 13. He would continue to lead until the 34th circuit when Derr soared past Wallace to the front of the pack.

On lap 58, Derr pulled into the pits for a quick refueling stop and benefited on that maneuver since a yellow flag waved at the same time, allowing Derr to keep his spot up front.

Wallace would remain in contention all the way and end up third, behind Derr and Jerry McCredie, also of Keokuk. Those three drivers completed all 100 laps.

Twenty of the original 32 starters were running when the checkered waved at approximately 1 hour and 25 minutes after the green flag was shown.