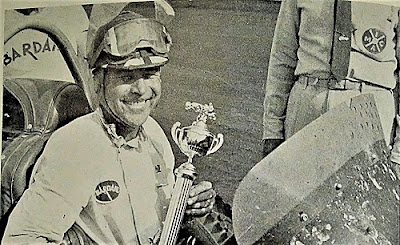 
Eldon, Iowa (August 27, 1959) – Pete Folse of Tampa, Fla., made an easy sweep of three auto races at the Wapello County Fair on Thursday.

He took the 15-lap main event in a time of 7 minutes and 59 seconds against 10 other cars.

Folse had to work for his lead in the American Handicap. Leep took second and Johnny Poulsen of Pasadena, Calif., was third.

The other win Folse captured was the Inaugural Dash, a 7-lap event. He broke into a quick lead and won the match without any competition in a time of 3 minutes and 20 seconds. Vardeman was second and Poulsen third.

An Australian pursuit brought first place for Jerry Pittman of Oakland, Calif. The race has the best qualifier in time trials starting in the rear and the other drivers ahead according to times scored. A driver is eliminated when passed.

In the 7-lap American Triumph dash, Hindahl took first with a time of 3 minutes and 28 seconds. R.B. Hensley of Richmond, Ky., marked second place and Johnny Knox of Des Moines was third.

Dale Reed copped first place in the National Speedway dash with a time of 3 minutes and 23 seconds. Redd was followed by LeRoy Neumayer of Compton, Calif., and Harold Leep.

Two drivers were taken to the local hospital after accidents.

Bob Stokes of Newcastle, Ind., was admitted to Ottumwa, Iowa, hospital with a chipped bone in his neck and Paul Dorcic of Chicago was treated and released at St. Joseph’s Hospital.

Dorcic had the wind knocked out of him when his car spun out in the National Speedway dash. Stokes was injured during time trials. He posted a time of 27.65 seconds and after he had passed the checkered flag, went into the turn, skidded and flipped. He was pinned under the car for a short while.