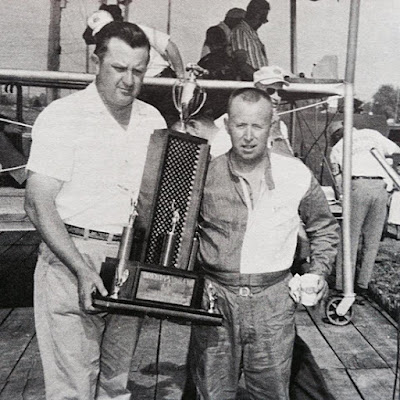 But A. J. Foyt couldn’t stay on his tail, and 44-year-old grandfather Don Branson sped to a grueling victory in the 30-lap feature USAC sprint race on the Vigo County Fairgrounds half-mile track Sunday afternoon.

Foyt dueled with Branson for 15 laps but the three-time national champion “just goofed” coming out of the second turn on the 16th lap and spun out, thus ending his hopes of repeating his June 14 victory on the Action Track.

“I had to slow down several times, because my arms were getting tired,” Branson stated after the grind over a track that was in something less than perfect condition.

The Champaign, Ill., veteran, who took a commanding 445 to 349 lead over Foyt in the national sprint car standings, admitted afterwards that he almost lost control twice in the second turn.

But the tiring effort of Sunday’s action won’t slow down the battle-wise grandpappy. He’s slated to be at Indianapolis this week for tire testing and he’ll run two sprint races next week and Allentown, Penn., on Saturday and New Bremen, Ohio on Sunday.

Though the track was rough in all four turns, the adverse conditions separated the men from the boys and provided excellent dueling.

Probably the greatest piece of driving of the day came in the first heat when Foyt, who started on the inside of the second row behind fast qualifier Johnny Rutherford and Lloyd Ruby, shot low going into the first turn and passed both Rutherford and Ruby.

The Texan Tornado held his low ground to take the heat, but Branson gave a preview of the feature as he rode high near the rail to take second spot.

Though Foyt won using the low groove, it became obvious that the high road was the fast way around, and Branson, starting on the outside of the first row in the feature, held the best position.

As the field hit the first turn in the main, Foyt, with Branson riding high, stuck his nose low, with no place to go. When the pair came out of the second turn and onto the backstretch, Branson held a commanding lead which he opened up to 10 car lengths by the end of the first lap.

After three laps, Foyt moved up high to chase Branson, but the 1961 and 1964 Indianapolis 500-Mile race winner went back to the inside on the 12th lap, acknowledging that the low road held the only hope for catching his wily adversary.

For the next three laps, with Branson high and Foyt low, the pair ran virtually side-by-side through the turns, but Branson, with the better traction coming off the corners, held a five-car-length lead on the straights.

Then Foyt bobbled on the 16th lap, and by the time the green came out again, Branson had a third of a lap lead over Johnny Rutherford.

In all practicality, Foyt’s spin ended the race, as Branson parlayed his lead over Rutherford into an easy victory.

Finishing behind Branson and Rutherford was Jud Larson, Bud Tingelstad and Lloyd Ruby. Time for the feature was 13 minutes and 17 seconds.

Larson started dead last in the third heat, but the past master of dirt tracks, who is racing for the first year since his 1959 heart attack showed his old form.

He passed three cars on the first lap, took over second spot on the next lap, and was in first by the halfway point, as he gunned to a third of a lap victory over Tinglestad and Andretti.