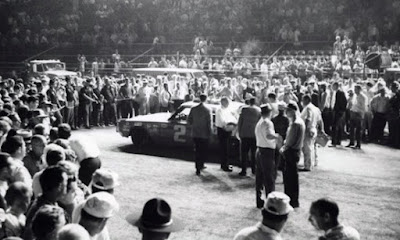 Don White is surrounded by well-wishers after winning the Indiana State Fair Century.

Foyt led the first 37 miles. Both White and Jones passed him during his compulsory pit stop. Foyt, who won the Indianapolis 500-mile race Memorial Day, crashed on the lap 83 when the front end of his car developed mechanical trouble. He was not hurt.

Jones was second in a Ford Fairlane and won $3,405. Al Unser of Albuquerque, N.M., took third in a Dodge Charger, which he banged up in a practice in a collision with Bill Cheesbourg of Tucson, Ariz. Cheesbourg did not make the race.