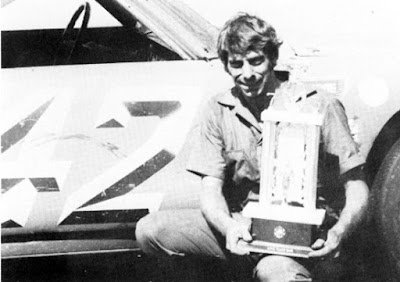 Fred Horn holds his trophy after being awarded the victory in the controversial 200-lap IMCA stock car feature at the Iowa State Fair.


Des Moines, Iowa (August 26, 1973) - Boos and cuss words filled the air. Fred Horn of Marion, Iowa, had to be restrained. Then victory in the 200-lap stock car race Sunday at the State Fair was taken from Mike Derr of Keokuk, Iowa, and awarded to Horn.

International Motor Contest Association officials had decided Derr was guilty of “rough driving” and had caused Horn to spin out on the final lap. Horn, driving a 1970 Plymouth, led for 136 of the 200 laps and was in charge from the 104th circuit on. Derr, 25, a teacher, had tried to pass several times in his 1970 Dodge, particularly during the last 40 laps.

Then came the final lap…

Mike started to pass on the inside as both drivers neared the end of the front chute and was still trying as they headed into the first turn. A short distance ahead, one of the slower cars - the 1970 Dodge driven by Mike Wallis of Gardner, Kan. - was running along inside the trek.

Mike was between Wallis and Horn. Suddenly Horn’s car was in a spin. Derr came on as the leader and took the checkered flag.

After Derr stopped to receive the trophy, Horn pulled up, obviously very angry, hopped out of his car and headed directly for Derr.

Race directory Woody Brinkman stepped in front of Horn and kept him away from Derr, who was still sitting in his car. “I’m not going to fight him,” Horn said. “I just want to talk to him.” Brinkman released him and Fred rushed to Derr’s car where he vehemently cussed him out.

Horn was pulled away and Mike stepped out and received the trophy amid some cheers that were drowned out by the chorus of boos from the crowd estimated at 8,000.

Derr walked away and would not comment. Horn and his pit crew gathered $50 and headed for IMCA Secretary Bill Hitz in the judges stand to protest the finish.

Hitz, Brinkman and other officials proceeded to hear other driver’s versions of what they saw take place and also called Derr to the stand to hear his side of the story.

After much discussion, Horn was declared the winner and awarded the $1,000 first prize. Derr was credited with second place and $750.

“Derr was driving too hard into that turn,” Horn remarked after he cooled off. “He was driving way over his head.”

“It’s the going thing in racing,” Horn added. “Whoever gets to the turn first get that spot; the other guy needs to let up on the gas.”

Derr contended he was more than half-way past Horn when they entered the turn. “Dad (12-time IMCA champion Ernie Derr) always told me that if the nose of your car is even with the other guy’s door, they should let up on the gas.”

Obviously, the mishap happened in the heat of competition. Officials lauded Derr for being a gentleman afterwards in discussing the episode. Derr and Horn would shake hands later and both would declare there were no hard feelings.

Time trials were canceled so the race could start at noon – two hours earlier than usual so the ground crew could prepare for the Elton John concert that evening.

Drivers drew for starting positions and Horn started the race on the pole position. He would be the leader when the green flag dropped.

Bill Wrich of Kennard, Neb., driving a 1972 Monte Carlo, would pass Horn on the lap 11 only to have Horn regain the top spot on lap 26. Horn would hold steady until lap 87 when Wrich would scoot by once again. Derr, meanwhile, had managed to work his way from his fourth row starting position to take third.

All three would take a pit stop on lap 104. Horn would be the first to exit, followed by Derr and then Wrich, who would eventually drop out 40 laps later with mechanical issues.