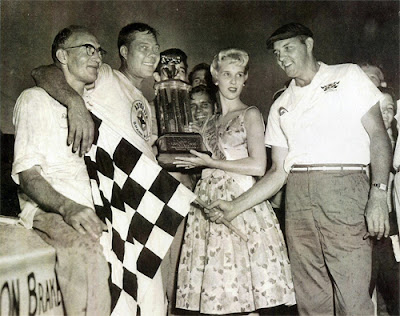 Johnny Beauchamp accepts his trophy for winning the rain-shortened 200-miler at Nashville.

Beauchamp, hailing from Harlan, Iowa, collected $3,666, including lap money. He covered the distance in 2 hours and 55 minutes for an average speed of 56.82 miles per hour.

White had earlier smashed the track record in qualifying, with a lap of 74.81 miles per hour.

The race was slowed by a number of caution flags, after crack-ups, but there were no serious injuries.