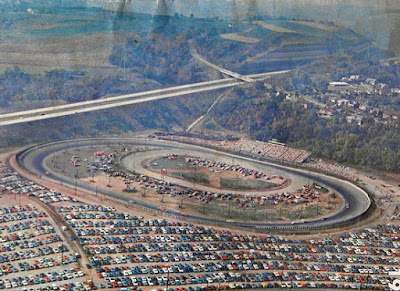 by Sam Ross Jr.
Carnegie, Pa. (August 5, 2006) - Mention Heidelberg Raceway to those whose frame of racing reference is measured in decades, not years, and the response is both reverential and wistful.

For those who were there - as fans, as competitors, as part of the operation before it closed following the 1973 season -- Heidelberg was an icon of greatness for the Pittsburgh racing scene. It also symbolizes paradise lost.

The Heidelberg facility, a half-mile oval that shared a front straight with a quarter-mile oval inside and later added a figure-eight track, was the crown jewel of Ed Witzberger and his Pittsburgh Racing Association empire, a track that hosted Indianapolis 500 winners as well as NASCAR races.

“There wasn’t a facility in Western Pennsylvania and very few in the country that matched its amenities,” said Larry Mattingly, the general manager at Jennerstown Speedway who worked in public relations at Heidelberg near the end. “The seating was state-of-the-art stuff. Witzberger had an electric scoreboard before anybody else had it. He had a press box with theater seating in it and it was air-conditioned.”

“That track then is probably better than 90 percent of the tracks that exist today. And that was back in the ‘60s and ‘70s. He was always very progressive at the short-track level.”

Today, Heidelberg, like many other tracks in Western Pennsylvania, has succumbed to various pressures and ceased to exist.

A shopping center, Raceway Plaza, now sits on the former track site, along Route 50 between Carnegie and Bridgeville.

Witzberger lost his appetite for running the track and leased it to driver Tom Colella for 1973. The track didn’t re-open in 1974.

“Tom declined to renew the lease because of the energy crisis,” said Don Gamble, a one-time Heidelberg racer and an avid racing historian. “Then some people offered Witzberger a bushel basket of money for the property. No one was running and knocking on the door to operate it as a track. The land was more valuable than running it as a racetrack. That happens at a lot of places. When the tracks are built, they're out in the sticks. Then towns grow out to meet them.”

If Red Miley needs a Heidelberg fix, he goes to Pennsylvania Motor Speedway, his half-mile dirt track at McDonald. There you will find the original Heidelberg grandstands and other track artifacts still in use.

“PMS is Heidelberg reborn,” Miley said. “When Heidelberg closed, Nick Garan, who was building PMS, was short on capital and he was trying to get stuff. They disassembled Heidelberg and took it lock, stock and barrel, down to the board trim around the main grandstand. When I went to paint it, I saw ‘Cold beer’ on the original boards.”

While Heidelberg lives on in memories, many other defunct area tracks are gone and largely forgotten.

• Greater Pittsburgh Speedway was a quarter-mile operation along Route 30 near Imperial that ran from 1958-70, going from dirt to paved in 1969 when Witzberger's PRA took over its operation. “Ed thought he needed another paved track to complement Heidelberg,” Gamble said.

“As a dirt track, it flourished during the mid-60s,” Mattingly said. ‘It never seemed to be as popular as an asphalt track.”

• Green Valley, later re-christened North Hills Raceway, was a quarter-mile dirt oval in the I-79 area of Mount Nebo Road that operated from the late 1950s until the late 1970s.

“We used to go up there to run on dirt, but I-79 took it out,” Miley said. “We raced there because you had to be 18 to get in the pits at Heidelberg.”

• South Park Speedway was a quarter-mile dirt oval that operated from 1953-68 near the fairgrounds and was part of the PRA circuit running Saturday nights.

• Turnpike Speedway was a one-third mile dirt oval along Route 30 in East McKeesport that operated in the 1950s.

• Claridge Speedway was a one-third mile dirt oval in that Westmoreland County town that ran in the 1950s.

“The guy who was supposed to drive the car for me didn't show up, so I drove it and did from then on,” Watt said. “They’d just scraped some grass off and hadn't watered the track. It was so dusty; I had to slow down and look out. When I saw I was on the grass, I knew I wasn't on the track anymore.”

Any attempt at trying to come up with a definitive list of defunct tracks is doomed to failure.

“There were many that came and went quickly,” Gamble said. “At one time, in order to have a racetrack, all you needed was a grader or something. You cut out some ground and you had a track.”

Heidelberg was several significant steps above the shoestring operations that have faded away.

“They raced on Thursday nights, which you could never do now, and were very successful,” Mattingly said. “They would bring in USAC sprint cars. I remember Bob Sweikert, who had won the Indy 500 in 1955, flying in there and landing in a helicopter. Jimmy Bryan, who won Indy in '58, was a competitor there. You could get big-name drivers.”

Heidelberg hosted several races in the infancy of NASCAR, in what then was Strictly Stock but has undergone name changes since to Grand National, Winston Cup, and currently, Nextel Cup.

“I did an interview about six or eight years ago with Lee Petty, who had won his first NASCAR race there in 1949 and the first thing he said was ‘Is Heidelberg still there?’” Gamble said. “It was known all over the country. It was the premier track on the East Coast.”

Heidelberg had begun as a NASCAR-sanctioned track, but that changed when Witzberger took over and, in 1954, founded the Pittsburgh Racing Association. The group ran five nights a week in an attempt to allow drivers more opportunities to win money.

“Witzberger was told NASCAR would run him out of the area in three weeks,” Gamble said. “Obviously, that didn't happen.”

Mattingly recalls sitting in the Heidelberg office one afternoon and taking a phone call for Witzberger from NASCAR founder Bill France Sr.

“Back then, it was 1971, NASCAR had a huge schedule and would run mid-week races and tours up through New York,” Mattingly said. “Bill France Sr. wanted to come back and run at Heidelberg, but Witzberger said no. He said ‘I can't make any money on that deal.’”

Such a turndown of NASCAR by an area track would be unthinkable now. Not so in 1971.

“At that time, nobody paid much attention to NASCAR,” Mattingly said. “It had the redneck image. It was popular in the Southeast, but for most of the northern people, the serious racing was considered to be what ran at Indianapolis, the champ cars. Ed didn’t have a big affinity for NASCAR anyway.”

While Witzberger seems to have missed the boat on NASCAR, he is credited with being a forward thinker in other aspects.

“Ed became tired of trying to maintain a dirt track, which is not an easy deal, so in 1967 he paved everything at Heidelberg, which was a pretty radical idea for around here at that time,” Mattingly said. “He was always sort of a step ahead of his time. He was difficult to work for, but he was very pragmatic. He had a handle on the future. He got rid of the coupe cars and switched to late models when nobody around here thought about late models -- that term didn’t even exist. He seemed to be able to read trends.”

“One of the thoughts in his mind was NASCAR was going more and more pavement and so he thought ahead and wanted to take Heidelberg in that direction.”

"They paid a big $3,000 to win," said Benning, who is retired and living in Florida. "Today that would be nothing. It was big back then. I remember one time we had 186 cars for a weekend race. Heidelberg brought in cars from Ohio, Michigan, Indiana weekly. It was the best track and it paid the most money."

Heidelberg became a family affair for the Bennings when son Norm Jr. began his career running in the newly created figure-eight competition.

“I lied about my age; I was only 15,” the younger Benning said. “You had to be 18 to race. There were only like four races I didn’t win. They’d start me last because it was inverted based on points, but I won a lot of races in that old Ford with a 390 engine.”

“I never replaced anything except the left front fender all season. I was pretty good at crossing that intersection.”

“I just couldn’t wait to get old enough to run the regular races there then they closed the place,” he said. “It was a great track with state-of-the-art lighting, a huge grandstand and people coming from 500 miles away to race there. It was just a special place.”