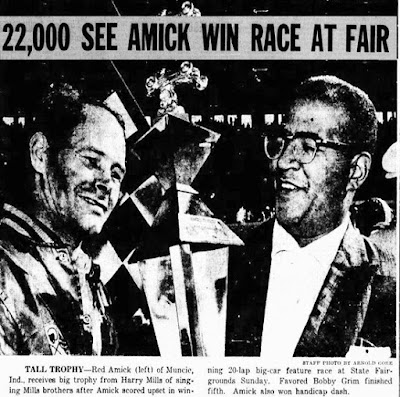 The three-time IMCA national champion wasn’t in sight when Richard “Red” Amick slammed across the finish line Sunday to win the first of four speedway sprint features scheduled at the half-mile dirt oval.

Grim, rated a heavy favorite after Don Carr of Indianapolis tore out a clutch in the first qualifying heat, was fifth in the 20-lap windup before a slightly surprised throng of 22,000 paid customers.

Amick wheeled his Chevrolet-powered sprinter to the front at the start from his inside third-row starting position. Grim, trapped high on the curves by Johnny Pouelson, the former Rolfe, Iowa, resident now living in Gardenia, Calif., didn’t get by Pouelson until the final lap.

Ken Rubright of Lyndon, Ill., added insult to Grim’s injured pride when he nosed out thee Indianapolis star by a scant wheel to take fourth-place money.

The crowd, the largest in two years, got a chill when Al Sherman of Van Nuys, Calif., crashed into the west wall at the start of the third qualifying heat. The impact apparently stunned the 47-year-old driver as he bounced around the wall under full throttle until reaching the straightaway. It then veered into the pit area, crashing into Ken Gottschalk’s car. Sherman was released from an area hospital after examination.