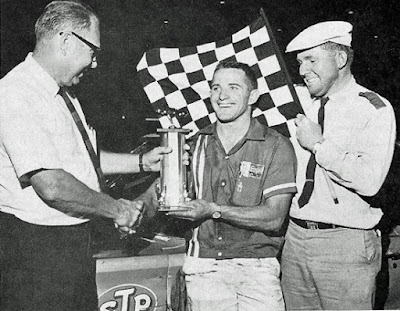 Des Moines, Iowa (August 28, 1966) - Ramo Stott of Keokuk drove his 1966 Plymouth to a record breaking victory Sunday night in the 250-lap late-model stock car feature before a crowd of 9,000 at the Iowa State Fair.

Stott whipped past Keokuk rival Ernie Derr on the 99th lap and went on to win by nearly a half lap. Derr was second, followed by Bob Jusola of Mound, Minn.

Derr charged in front at the start and hiked his lead to two laps when he caught Ramo napping on the 11th lap. The field up to that time had run five laps under a yellow flag.
Ramo pitted ahead of Derr and got out one lap later. However, Ramo later ran past Derr in a driving charge off the first corner of the 99th lap.

On the 126th lap both Ramo and Derr pitted for fuel. But Ramo got out first.

Every car was required to stop 30 seconds in the pits.