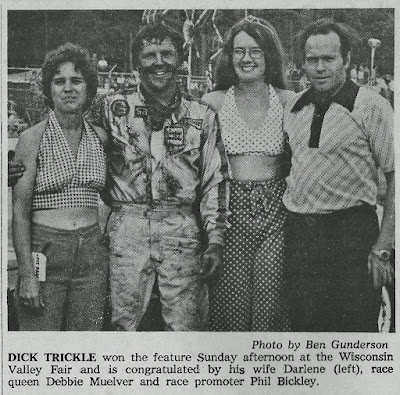 Wausau, Wis. (August 10, 1975) – Dick Trickle turned the tables on the dirt trackers at the Wisconsin Valley Fair Sunday afternoon in the seventh race of the Wisconsin Late Model Championship Series as he skated to victory on a dry slick track.

The race was a four-way battle most of the way between Trickle, Tom Steuding, Leon Plank and Red Steffen. Plank was leading until lap 19 when Trickle took over the top spot.

Steuding took over third on lap 23 and followed up three laps later by passing Plank for second. This ended all the passing by the top as positions did not change over the last 24 circuits.

The heat, dust and dry slick track conditions created many problems and combined mechanical issues that left only four cars on the same laps at the finish.

Pet Parker followed in fifth one lap down with Ron Goss and Al Stepan sixth and seventh three laps down slowed by problems and Roger Ress six laps down in eighth.

Dave Morgan of Rice Lake, Wis., won the accident-marred semi-feature. No fewer than five yellow flag slowed the action in the 20-lap event. The most spectacular accident saw Rick Fox of Neillsville, Wis., put his 1973 Camaro through the backstretch fence.

No one was injured although the accident did cause a considerable delay in the racing program.

The day began with Steuding setting a new track record in qualifying with a time of 25.40 seconds. The time was bettered the time of 26.18 seconds set by Harold Mueller on Thursday night.