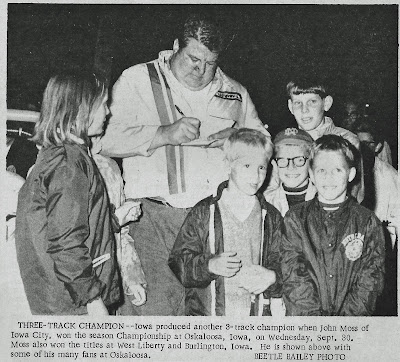 Oskaloosa, Iowa (September 30, 1970) -  John Moss of Riverside, Iowa, captured the 50-lap Southern Iowa Racing Association season championship on Wednesday night at the Mahaska County Fairgrounds in Oskaloosa, Iowa.
Moss took the lead from his pole position at the drop of the green and was never threatened as he led all 50 circuits. Moss pocketed $550 cash and also received the track championship trophy. His win clinched the SIRA point championship for the 1970 season. With point titles already won at Burlington and West Liberty, Moss became a three-time track champion.
Stan Stover of Reinbeck would finish second in the feature followed by Dan Dickey of Packwood, Ron Perdock of Washington and Jerry Roberts of Prairie City.
Ed Pilcher of Ottumwa would start the evening off by winning the 5-lap trophy dash. Mark Mosier of Washington, Ed Sanger of Waterloo, Mel Morris of West Liberty were heat winners while Morris won the 6-lap Australian Pursuit. Ron Perdock was the 10-lap semi-main winner.