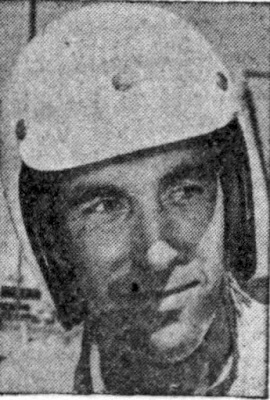 Hutcherson caught the checkered two car lengths ahead of Lenny Funk, Otis, Kan., the unofficial Kansas stock car champion. Derr, also of Keokuk, Iowa, finished third.
The stock car program, as usual, presented many minor fender bending "brushes" and a few spinouts. There were no serious accidents. Competition in all races was keen, and this at least partially made up for the fact that the race program was one of the slowest presented here in years. This was through no fault of drivers, several of whom have been turning half-mile tracks in 26 seconds or less.

Race officials inspected the track Tuesday and reported it in tip top condition. They were unaware that a maintenance man scoured the track to a depth of about 15-inches Wednesday, and that it not subsequently been "ironed out". The track was so soft that before time trials had been completed, holes 15 inches deep had been gouged at both turns.

Drivers forced to the outside edge of the track reported gear housings were "dragging". Despite the dangerous track drivers went all-out to put on a good show, and if wheel to wheel competition is what it took, they all succeeded.