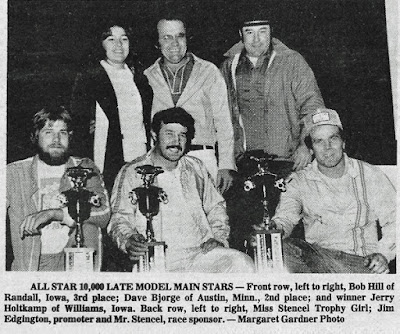 Fairmont, Minn. (September 23, 1978) – The All-Star 10,000 turned into the All-Star 12,000 this past weekend at Fairmont Speedway, as Jim Edgington, track promoter, added extra money to the purse due to the exceptional turn out of both cars and race fans. More than 100 cars took part in the two-day event, including over 60 late models.
Fans turned out in near record number, and saw some of the very best racing in the upper Midwest.
The best was saved for last as Jerry Holtkamp of Williams, Iowa, Dave Bjorge of Austin, Minn., and Bob Hill of Story City, Iowa, staged a three-car race for the checkered flag in the 40-lap late model main event.
Hill started on the pole position and took the lead at the opening green flag and held it for the first 25 circuits. Holtkamp, who owns a couple of feature wins this season at the half-mile track, took the lead away from Hill on lap 26 and then held off a severe challenge from both Hill and Bjorge to take the win. The three drivers were never more than a car length apart for the entire 40 laps.
The only caution flag in the feature occurred on lap 6 when Bob Shryock of Estherville, Iowa, the season point champion at Fairmont, tried to get by Holtkamp by going to the high side of the track. Unfortunately for Shryock, he got too high on the track and tumbled off between turns one and two.
Shryock restarted at the rear of the field and showed why he’s one of the top late model pilots in the Midwest, passing 24 cars and finishing the evening with a top-five finish. Shryock was easily the fastest car on the track.
Lee Devries from Hollandale, Minn., won the 20-lap street stock feature.
The All-Star drew drivers from six states, drawing competitors from Iowa, Minnesota, North and South Dakota, Nebraska and Wisconsin.