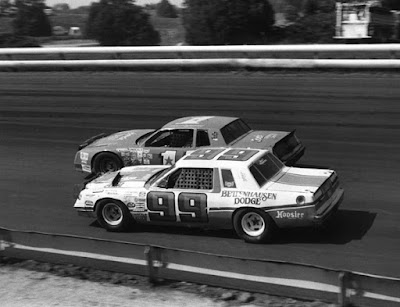 
Du Quoin, Ill. (September 1, 1985) – Lee Raymond, the season long ARCA Supercar Series point leader, took a major step towards locking up the title by winning the Southern Illinois 200 Sunday at Du Quoin State Fairgrounds.
Some late race drama unfolded when Raymond, who had a full lap on second place Dean Roper and third place John Prior, cut a tire and was forced to pit on the 185th lap under green. Roper made up enough ground on the one-mile dirt oval to get back on the lead lap, but Raymond’s crew serviced his Monte Carlo quick enough to hold the point position.
“The crew won this one,” Raymond said afterwards. Despite leading the series’ points since early in the season, it was Raymond’s first victory of the 1985 season.
“It’s been a long dry spell for us this year,” Raymond said of his fifth career ARCA win. “This gives me a little breathing room in the point race. (Car owner) Jim Doyle has been through these point races before, but it’s a new experience for me.”
Bobby Jacks posted pole qualifying speed for the third consecutive year at Du Quoin and led through lap 32. Raymond took over on lap 33, but Jacks regained the top spot on lap 47. When Raymond, who seemed to get stronger as the 200-mile race wore on, took command on the 51st circuit. He gave up the lead only to Roper from lap 104 to 123 during pit stops.
An estimated 9,000 Du Quoin State Fair spectators saw Raymond take the checkers 12 seconds ahead of Roper. They then gasped as John Prior beat Bob Brevak to the finish line for third, lost control, smashed the first turn guard rail and flipped. Prior, who was uninjured, and Brevak were followed by defending race champion David Goldsberry.