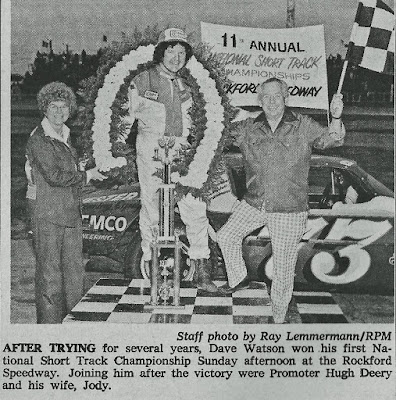 Rockford, Ill. (September 26, 1976) – Fighting the threat of rain and 32 other drivers, Dave Watson of Milton, Wis., powered his way to victory in the National Short Track Championship final held Sunday afternoon at Rockford Speedway.
Watson, a former rookie of the year back in 1968, took the lead on lap 88 of the 200-lap contest and went on to win by six seconds over runner-up Joe Shear, a three-time winner.
Low overcast clouds threatened the race with rain, which began during Saturday night, finally letting up for a 2:30pm starting time. But it misted throughout the entire race which amazingly was run incident free. Only three caution flags waved, two for blown engines and one for debris on the track.
The $30,000 plus purse drew a 77-car entry and fans from throughout the country, many who set up housekeeping in their campers on the speedway grounds.
Dave Roahring, a former USAC sprint car competitor, led the first 20 laps until he was overhauled by Canada’s Jerry Makara who set the pace until Watson whizzed by for the top spot.
Finishing third behind Watson and Shear, with a $1,000 bonus in his pocket for setting a new track record in qualifying, was Randy Sweet of Edwardsville, Mich. He blazed around the fast high-banked quarter-mile in the time of 13.792 seconds.
Fourth and fifth place went to Roahring and Don Biderman of Oakville, Ontario. The top five finishes were all in 1976 Camaros.
Two standout drivers failed to finish the long-distance race. Tom Reffner of Rudolph, Wis., and Larry Schuler of Lockport, Ill. Schuler rammed Sweet from behind during a caution period and puncture the radiator while Reffner was a definite challenger in his AMC Javelin until a valve spring broke on lap 110