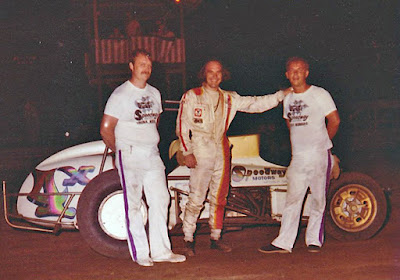 Jan Opperman led from start to finish at Topeka.


Topeka, Kan. (September 6, 1969) – Jan Opperman, driving the Bill Smith 4x, was an easy winner on Saturday in the first of two days of IMCA sprint car racing at the Mid America Fair.
Opperman of Hayward, Calif., starting on the outside of the front row, took the lead at the drop of the green flag and was never seriously challenged during the 25-lap event.
Dick Sutcliffe of Greenwood, Mo., finished second, Jay Woodside of Kansas City was third, Don Mack of East Grand Forks, Minn., took fourth and Eddie Leavitt of Kearney, Mo., rounded out the top five.
In the day’s only mishap, Buzz Rose of Lemita, Calif., hit the spun-out car of Joe Saldana of Lincoln, Neb., flipped high in the air, then barrel-rolled over and over down the steel guardrail. Taken to an area hospital, Rose was reported to have sustained a skull fracture and several broke vertebrae.