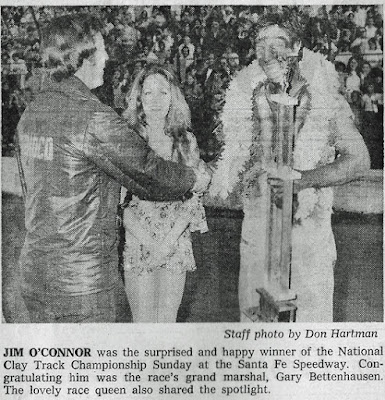 Hinsdale, Ill. (September 24, 1972) – Chicagoland’s longest single race – the 200-lap National Clay Track Championship – conquered fatigue ridden Arnie Gardner of Geneva, Ill., only 18 laps from the finish, allowing Kankakee, Ill’s., Jim O’Conner to move ahead and win the marathon 100-mile late model stock car championship and the $2,200 prize which accompanied it.
Gardner, who led all but a few of the 182 circuit, suddenly lifted his hand, pulled into the infield and slowly exited his finely-tuned Chevelle, obviously too exhausted to compete the remaining distance.
Until Gardner’s literal collapse, he and Santa Fe point champion Dick Nelson of Chicago, staged a seesaw battle for the top spot that had the near-capacity crowd on its feet, cheering every strategic maneuver.
Gardner and Nelson shadowed each other with Gardner maintaining a car-length lead through most of the distance. Nelson dipped low and inched ahead on lap 40 but when a yellow flag slowed the field a few laps later, Garder got under the clay oval master to regain the front-running position.
Thee parring match continued to lap 10 when again Nelson made his move, dipping quickly to the inside as the pair entered turn #3. He got by Gardner with impressive torque and began to move away slightly.
However, the pro-Nelson rooting section’s hysterical exultations quickly turned to groans when their favorite driver half-spun in a cloud of smoke two laps later and he pulled into the pit area with burned out brake linings.
Meanwhile, Gardner, with fresh breathing space, moved into a commanding position and looked to be the sure winner. By lap 125, he had everyone in the field except O’Conner and Ed Sanger of Waterloo, Iowa.
But just as quickly as Nelson’s mechanical failures had shocked the crowd, Gardner’s physical breakdown on lap 182 came with lightning quick unexpectedness.
As the reluctant Gardner “walked” his car to the pit area, auto racing’s fickle nature had claimed another so-called race victor by snatching another seemingly sure win.
O’Conner, who had driven a smooth and flawless race, put his 1972 Chevell into the lead at that point and held on for the final 18 laps to score the rich victory.
Ironically, it was Nelson who relieved Gardner when the latter exited his car, but too much valuable time had been lost and victory was out of sight. He finished in the fifth spot, three laps off the pace.
Of the 33 cars which started the grueling event on the hard-slick, half-mile clay oval, 20 were still around at the finish.
Fred Horn of Marion, Iowa, brought home his 1970 Plymouth home in second place, one lap behind the winner. Ed Farrell of Clarendon Hills, Ill., was just behind in third in a 1971 Buick. Sanger, running second with two laps left, ran out of gas and settled for fourth in a 1970 Monte Carlo and Don Waldvogel of Lockport, Ill., took fifth in a 1972 Chevelle.
Results –