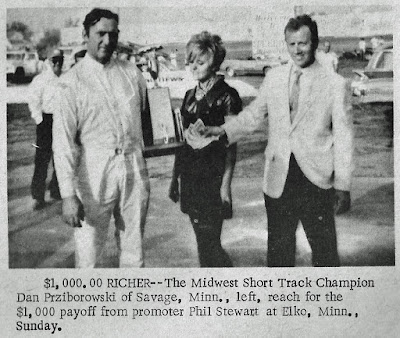 Elko, Minn. (September 20, 1969) – Dan Prziborowski of Savage, Minn., the Minnesota state racing champion and overall point champion on the Tri-Circuit won the rich Midwest Late Model Championships at Elko Speedway on Sunday afternoon.
Przibowski bested John Ziegler of Madison, Wis., and later on the superb USAC “Rookie of the Year” Dick Trickle of Wisconsin Rapids, Wis., to seal the victory.
For winning the big 100-lap feature, plus lap money and assorted preliminary races, Prziborowski collected well over $1,500 making his two-weekend total, including last week’s season championships, a whopping $2,500. That boosted the driver’s season totals to well over $12,000.
In order to get his hands on the winner’s check, Prziborowski had to come from his eighth starting position and get ahead of Ziegler, who had led nearly for 50 laps. Meanwhile Trickle, who had not time-trialed on Saturday and started 28th out of 30 cars, had moved up to the front with beautiful driving and was on Prziborowski’s tail.
Trickle moved around Prziborowski on lap 54 and maintained the top spot until lap 88 when Prziborowski slipped inside of Trickle on the north turn after the USAC star momentarily lost control of his car and slid up the track.
From there on it was Prziborowski’s race and he would win by several car lengths at the checkers. Trickle would settle for runner-up honors and go home with $850.
Dick Duerst of McFarland, Wis., finished third and Ron Olson of Bloomington, Minn., a former state titlist, came out of retirement to claim fourth ahead of Marv Marzofka of Wisconsin Rapids, Wis., the record breaking driver who won the Minnesota State Fair 300 a week earlier.
Wayne Larson of Bloomington, Minn., the defending Midwest Late Model Championship winner, started on the pole after winning a qualifying heat race but tough luck in the form of an early spinout took away any chances of repeating. 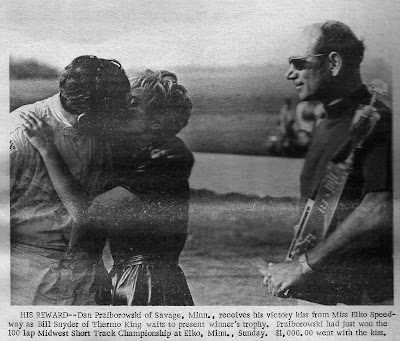