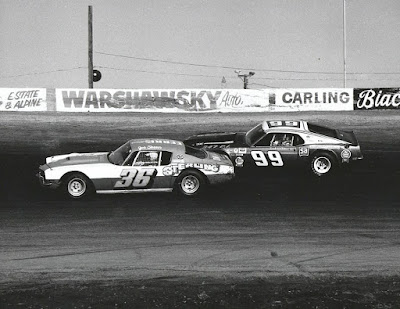 Joe Shear (36) and Dick Trickle (99) battle it out during the 1974 National Short Track Championships. Shear would go on to win his second career title. - Bernie Tappa Photo


Rockford, Ill. (September 29, 1974) – Joe Shear of South Beloit, Ill., became the first late model driver to win two National Short Track Championships at Rockford Speedway. Late Sunday afternoon, the Camaro pilot took the checkered flag in the ninth annual running of the Black Label sponsored 200-lapper.
Coming off the pole position, Greg Arenson of Edina, Minn., took the initial lead. Shear started in the fifth row opposite arch-rival Dick Trickle of Wisconsin Rapids, Wis. Shear and Trickle timed in with identical qualifying times of 14.29 seconds on the high-banked quarter-mile asphalt oval.
Driving a 1973 Camaro, Arenson held the lead for 19 laps followed closely by Johnny Reimer of Caledonia, Wis., and Dave Watson of Beloit, Wis., both behind the wheels of 1973 Camaros. In the 20th go-round, Arenson’s rear end broke loose just a little in turn four, but just enough for Reimer to slip by for the lead.
Shear and Trickle didn’t waste any time in moving through traffic and pulling in behind Reimer. But it was Johnny’s race until lap 114 when the 1972 National Short Track winner got around him to set the pace.
Lap 176 proved to be a violent one as Reimer went into a slight slide, and Trickle, right on his tail, possibly because of late afternoon sun, was unable to avoid the big crunch. Reimer went sideways and put Trickle into the unforgiving wall. It also caused a chain reaction, collecting six other machines as well.
Reimer was out for the rest of the event but Trickle limped into the pits, changed a mangled piece of metal on the left front and pulled out wrinkled sheet metal on the right side. It was done quick enough during the red flag so that he was able to return to the track and get his position back.
The green flag restarted the race but it was Shear all the way to the finish followed by Trickle, Watson, John Knaus of Rockford, Ill., and Tom Musgrave of Mundelein, Wis.
Six qualification races were held earlier in the day, four of which were rained out the night before. Winners of the two 50-lap features were Neil Callahan of Merrill, Wis., and Jim Pierson of Milton, Wis. The four 30-lap qualifiers were taken by Marvin Palmer of Hoffman Estates, Ill., George Weyrauch of Lake Geneva, Wis., Al Schill of Franklin, Wis., and Don Leach of Beloit, Wis.
Jerry Straube of Waterford, Wis., and his pit crew set a new record of 54.22 seconds in the S-K Tool sponsored National Pit Stop contest. Joe Shear and his crew finished second and Dick Trickle and his crew took third.
With 94 entries from as far as Colorado, the event took on an international flavor as a number of top drivers from the Canadian circuit pulled in.